My Eyes Have A Cold Nose

Set on the vast plains of southeastern New Mexico in the Depression of the 1930s, this historical mystery novel featuring Gigi Garrett, daughter of the famous Lincoln County Sheriff Pat Garrett, sculpts an intense interior adventure from within the mind of a blind woman as she courageously follows her seeing-eye dog Teene to help a boy from the wide side who has no one else in his corner. 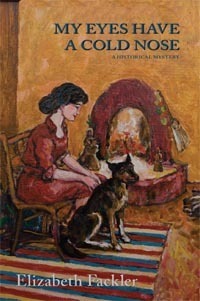 Winner of the New Mexico Book Award for Best Historical Fiction 2009. Available from Sunstone Press or your favorite bookstore. Also available as an ebook!

Bone Justice: The Beginning of the Seth Strummar Saga

Seth Strummar won big at the poker tables his last night in Laredo, coming away with $200 in gold coin and the deed to a ranch in Colorado. Thinking to leave Texas and the outlaw life behind, he rides to Allister’s cabin to tell him goodbye. But Ben Allister isn’t there. Instead Seth finds two women captives Allister bought off Comancheros: a young girl constantly crying and a mature woman who keeps a stony silence.

Seth takes both of them as a final message to his former partner that Ben has slipped too low if he’s dealing in women. Following the Pecos River north toward Santa Fe, Seth becomes embroiled in the women’s tragedy and has to stake his life to save them from falling back into Allister’s hands. When a young daredevil named Angel Madera joins them, a triangle emerges between him, Seth, and Esther, the young girl who is no longer crying but in the process of being healed from all she has endured. .

AVAILABLE AS AN EBOOK online. "Both Lily and Claire are authentic examples of pioneer women who attain strength and autonomy in later life if the hardships of their youth haven't killed them first." New Mexico Magazine